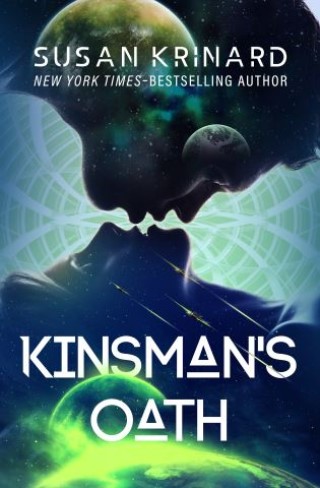 Human telepath Ronan VelKalevi, a Kinsman, was kidnapped by the catlike Shaauri when he was a child. Now, more than two decades later, he has escaped from the aliens who have held him captive for much of his life. On the run, he is saved by the captain of the spaceship Pegasus, Cynara D’Accorso.

Though drawn to Ronan, Cynara is suspicious of his motives, for there are Kinsmen who have proved traitorous to their race, aiding and abetting the Shaauri. But as Ronan and Cynara’s minds—and bodies—meld in a passionate embrace, it soon becomes clear the claws of the Shaauri have dug deeper into Ronan than either he or Cynara could have ever imagined . . .

“Returning to the ‘Kinsman’ universe that she first described in an Out of This World novella, Susan Krinard furbishes science fiction romance readers with a wonderful tale of a future in space marred by armed conflict. The delightful story line hooks readers of both genres with its descriptive insight into a galaxy under siege while also providing two wonderful characters wondering whether they should be loving partners or disillusioned antagonists.” —AllReaders.com

Susan Krinard:
Susan Krinard is a bestselling author of futuristic and paranormal romance novels. She has won a RITA Award for Best Contemporary Fantasy; Affaire de Coeur’s award for Best Up-and-Coming Author of Futuristic, Fantasy, and Paranormal Romance; and the PRISM Award for Best Dark Paranormal and Best Short Fiction for her novella “Kinsman” in the bestselling anthology Out of This World. Her romance Lord of the Beasts hit #33 on the New York Times bestseller list. Most recently, Krinard has published the Nightsiders paranormal romance series with Harlequin Nocturne and the Midgard urban fantasy series with Tor Books.